The dye is nearly cast, or so it is said.

A couple of Senate holdouts – Senators Joe Manchin (West-Virginia) and Krystin Sinema (Arizona) – are posturing aggressively and, at times, dismissively, to distinguish themselves from progressive Democrats. In the process, they appear set to derail the entire legislative package that House and Senate Democratic leaders fashioned to implement President Biden’s central campaign commitments to working families – and to the planet.

Biden’s central commitments prominently include an expansion of affordable health insurance and lowered prescription drug costs, two-years of free community college and an expansion of federal grants to help students afford higher education, 12-weeks of paid medical and family leave so that new mothers do not thereby incur insufferable economic loss, and expanded support for high-quality child care and preschool so as to ensure that low and moderate-income parents can continue to work secure in the knowledge that their children are being well cared for.

Nothing about these and other popular features of the ‘Build Back Better Plan’ contained in the large budget reconciliation measure smack of socialism, no less “Marxism” – as corporate shills mindlessly insist. Why is that? Simply because the various provisions leave our economy’s means of production, distribution, and exchange to the free market.

That is true, too, with respect to the very moderate climate provisions in the budget reconciliation bill. Those include the Clean Energy Payment Program, to incentivize utilities to rely on increasing shares of non-fossil fuel generation – including wind, solar, geothermal, hydro, and nuclear. They include, as well, extensions of clean energy tax incentives for wind, solar and nuclear, and a new credit for production of hydrogen fuel. The provisions aim to compensate for historic market distortions that favor big oil, gas and coal.

But the most important such climate provision under consideration for the budget reconciliation bill – an across-the-board carbon fee, accompanied by rebates to families – is the subject of growing public demand. And that demand, in turn, is undergirded by the organized outreach of Citizen’s Climate Lobby, the informed advocacy of climate scientists (including Dr. James E. Hansen) and the support of numerous economists (including Ben Bernanke, Alan Greenspan, Amarta Sen, Robert Solow, Richard Thaler and Janet Yellen).

I use the term “carbon fee” deliberately here, not “carbon tax,” since the budget reconciliation proposal seeks to collect charges directly from fossil fuel producers that wish to continue to use our common atmosphere as a dump for their dangerous greenhouse gas pollution. Moreover, the proposal seeks to return a large share of revenues to low and middle-income households, enabling them, on average, to offset any unavoidable higher energy cost.

The relative importance of a rising carbon fee is neatly illustrated in a recent Resources for the Future analysis. I’ve copied a relevant RFF graphic below, to illustrate. The upper line (black), represents business as usual, and that indicates that energy-related CO2 emissions will stay high without changes in US policy. The second line (blue) indicates a 20% reduction in emissions will result from a combination of (a) tax incentives for renewable energy, energy storage, energy efficiency, and clean light-, medium-, and heavy-duty vehicles (similar to the Clean Energy for America Act proposal, or CEAA), and (b) incentive payments for utilities to phase in increasing amounts on carbon-free energy. Better, but not nearly good enough.

The third (purple) line indicates that slightly deeper emissions reductions would result even with a modest economy-wide carbon fee – one commencing at $15 per tonne of CO2 emissions in 2023 and increasing by 5 percent annually (above inflation).

Meanwhile, the solid red and green lines illustrate that far deeper emissions cuts would result from a more significant carbon fee, that is, one commencing at “$15 per metric ton CO2 beginning in 2023, rising to $30 in 2028, and increasing at $10 per year (above inflation) through 2040.” 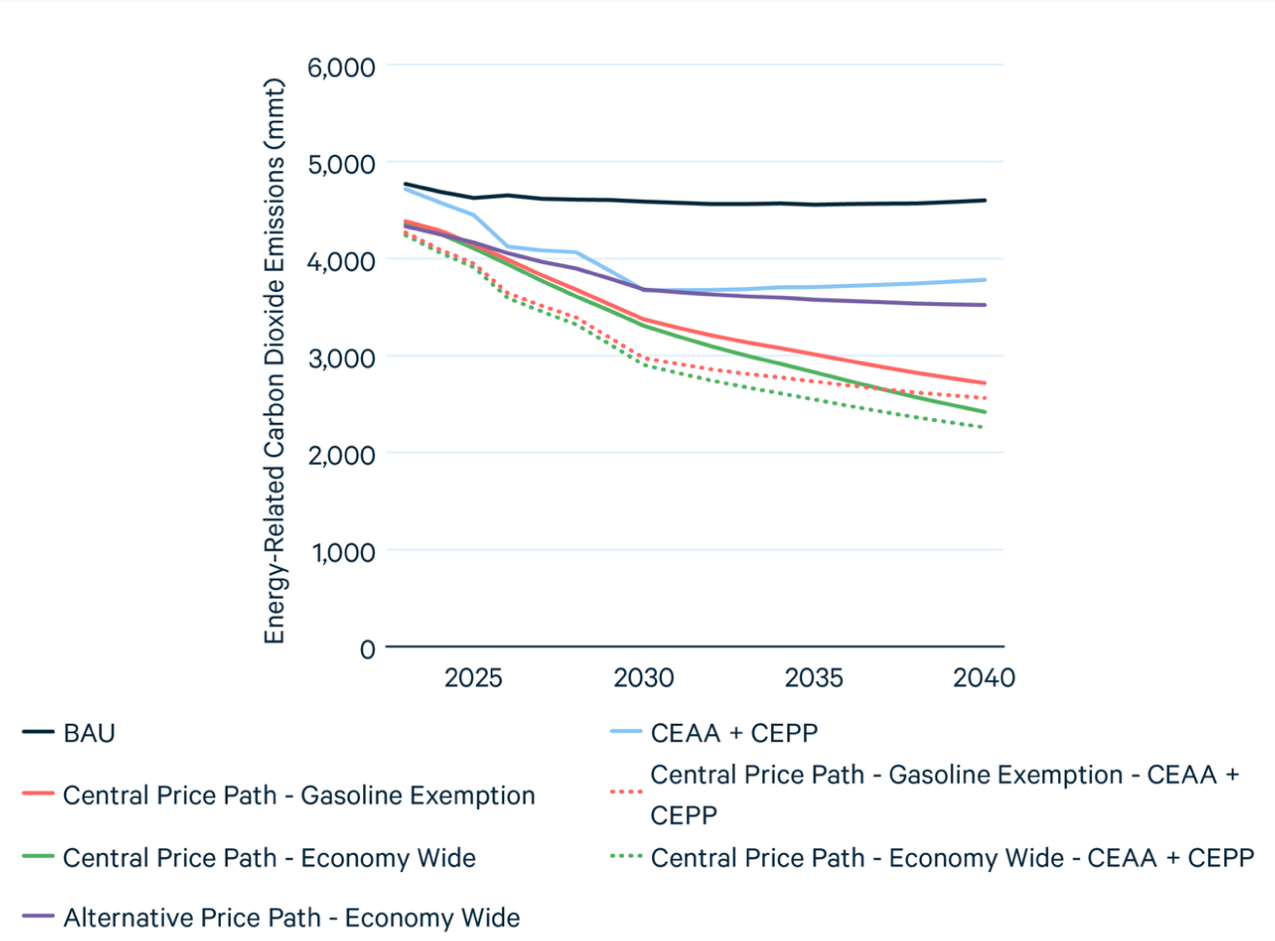 Two observations: First, the combination of all these proposals, if enacted, seems consistent with President Biden’s stated goal of a 50-52% emissions reduction from 2005 levels by the year 2030. But second, if the more stringent carbon fee proposal is jettisoned the balance of the climate proposals would enable the US to secure only a small fraction of the Biden emission reduction commitment. For further detail, I commend the RFF analysis to you, but what is clear is that we need a centerpiece decarbonization policy rather than mere window dressing.

As for Manchin and Sinema, it remains unclear what they are doing since they seem incapable, or at least unwilling, to say what they want. Senate Budget Committee Chairman Bernie Sanders was interviewed about this on Saturday and, with impressive circumspection and restraint, intimated that he was still unsure of their bottom line.

Partly the recalcitrant Democrats appear to be concerned about the budget reconciliation bill’s purported $3.5 trillion price tag. But that $3.5 trillion over ten years figure is flatly misleading, as it represents only the gross new investments authorized over a ten-year period – without even accounting for the measure’s offsetting revenues raised and spending reductions.

So the $3.5 trillion figure is absurd, and misleading. Its use is also inconsistent. Sharon Parrott, of the Center on Budget and Policy Priorities, made this point in late August, when she noted that such a gross investment approach departs sharply “from how the costs of the [2017] Trump tax cuts were evaluated. [They] were widely reported as costing $1.5 trillion. . . . representing the net cost of the tax cuts and spending increases after the significant tax increases and spending cuts the package included were taken into account. [Had] the Trump tax bill [been] evaluated only on the basis of the tax cuts and spending increases alone. . .it would have been characterized as a $5.5 trillion package [but] no one suggested that the Trump tax bill cost more than $5 trillion.”

Is it really too much to expect (a) consistency in federal accounting, (b) a straightforward explanation by Senators for opposing long-overdue aid to working families, and (c) real action to address our rapidly deteriorating climate crisis?

We will have occasion to return at least to point (c), as our Road to the White House No-Excuses Tour continues. Today in Burlington, tomorrow in South Royalton, and Friday in Boston. Real action on climate is required, without further delay.